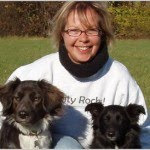 Leslie has always had a love for animals, but it would be years before she would be in a position to combine her passion for pets and charitable work.

She grew up in a small town in Indiana during the 60's in an entrepreneurial family. Her father was the owner of a large retail store, and her mother was extensively involved in charitable work.

During her teen years she turned her attention to music, becoming one of the foremost young flutest in the State, while running her own window washing business for the town's retailers, and working with a wide variety of charities in her spare time.

After her education she moved to the Indianapolis area and began her career in marketing, starting with the Indianapolis Convention and Visitors Bureau, and then as Community Relations Manager for Blue Cross and Blue Shield of Indiana/Anthem, Inc. (now known as Wellpoint).

As CR Manager for Anthem, she was tapped to head up the company's community relations projects and programs, and their involvement in the 1987 Pan American Games and the 1988 Olympic Games.

With sports marketing now in her blood, she was recruited by a sport marketing firm in Houston and headed down to Texas to direct their sponsorship department. Wanting to get back to her charitable roots, she then took an Area Director position with the Texas Special Olympics as a way to combine her love for sports marketing and charity.

In the 90's, she decided to return to Indiana to be closer to her family and began heading up the event marketing department at Macmillan Computer Publishing, followed by directing the marketing efforts as VP of Marketing for Virtual Financial, an Internet banking SAS company.

As the dot.com industry began to falter, she decided to put all her experience and knowledge toward consulting for a wide variety of technology companies in the Indianapolis and surrounding area, helping them with their marketing as an independent consultant.

About that time, Leslie decided to adopt a young pup (Johann) from a local animal shelter. And so began the biggest change in her life, leading her to combine her marketing skills and knowledge, and charitable activities with one of her long time passions - her love of pets. That's when she opened the doors of Pawsible Marketing and Johann The Dog, Inc.

Now Johann The Dog, Inc., Pawsible Marketing, and the websites and activities within those companies have brought Leslie (and her dog, Johann) to the forefront of the pet industry nationwide.